Meet the turbidity MacGyvers of UQ 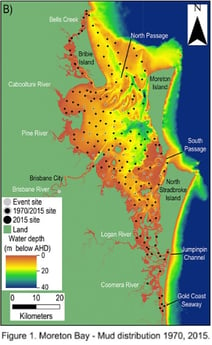 The upfront capital cost of sensors, gateways and system design and install have prevented the use of remote environmental monitoring systems in the past.

Staff at the University of Queensland have deployed a low cost turbidity sensor commonly used in washing machines to accurately measure sediment loads in recent events.

What monitoring system would you choose to measure sedimentation?

That question became salient for the University of Queensland, when they discovered a dramatic increase in mud distribution across a large sub-tropical embayment, Moreton Bay, Australia. 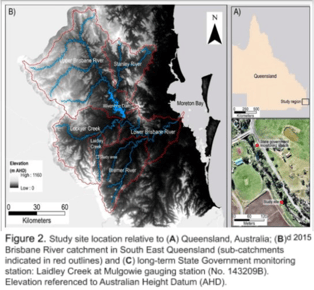 The team at UQ were seeking the source of fluvial mud deposited over a 460km2 area in Moreton bay thatcould not be accounted for using historical river turbidity data. Data that was historically sparse because:

On 30 January 2011, Category 5 Cyclone Yasi made landfall in northern Queensland. Extremely low-pressure, it hovered 22 hours over a gigantic area. Mass rainfall (140mm per day to some locations, over a week). Wind gusts over 285km/h. $3.5Bn of damage. Environmental monitoring hardware and river sampling stations were destroyed. Carrying decades of sedimentation equivalent in days.

The soil erosion, sediment transport and discharge had a significant impact on critical infrastructure and environment. 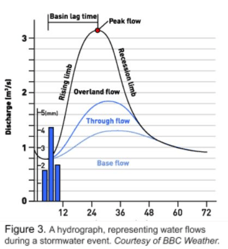 The business case for deploying expensive automatic sampling stations, over a catchment area of 20,000km2, is a tough one.

Especially that each can cost up to about $75,000 all fitted, the event may occur over 3-4 days per decade, such stations are very exposed to physical damage.

So why not use turbidity sensors for automated continuous monitoring?.

At face value, turbidity sensors are a much better solution, presenting a much finer, and much more thorough picture of the peak flow event. 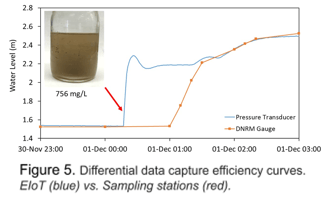 Problem is, for a dedicated sensor measuring only turbidity (as opposed to sampling stations) turbidity sensors remain very expensive.

And an environmental engineer installing turbidity sensors worth $10,000 each will be extremely choosy about where, and how many to deploy, which can also limit results. Having more sensor points is also better for system resilience. 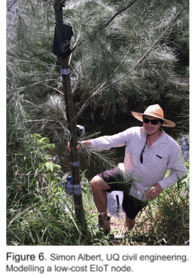 No sense engineering a solution, however cost-effective, if it is washed away during peak flow.

As it turns out, in real life, it is preferable to have seven $9.90 turbidity sensors zip-tied to trees at branch height, than one large monitoring station in the area. Especially when said station was washed away by the last event.

UQ engineers designed a turbidity monitoring node consisting of a dishwasher turbidity sensor, a total suspended sediment (TSS) logger, a single stage sampler, and a time-lapse camera for a total cost of less than US$420.

New insights: Seven sensors were deployed across an elevation gradient on the stream bank of Laidley Creek, Queensland, Australia, and two of these nodes successfully characterised the near-bed suspended sediment dynamics across a major flood event. Near-bed TSS concentrations were closely related to stream flow, with the contribution of suspended bed material dominating the total suspended load during peak flows. Sedimentation data measured through these cheap sensors, was multiple times more accurate (and larger) than historical data from expensive sampling stations.

“You can ask different questions,” explains Alistair Grinham researcher at University of Queensland and mentor at UQ’s Turbidity challenge. “What is the concentration profile during X event for example?"

Noise reduction: This approach is a useful way of separating different sediment type loading events. You can get a much better signal to noise ratio at higher concentrations.

Resilience: Installing more sensors immediately bolsters system resilience. UQ installed 7, most got washed away, but with the 2 remaining ones they had strapped to trees, they uncovered colossal insights. 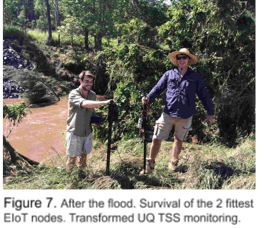 These small sensors are not very accurate below 20 NTU. They do not measure background concentrations very well, or in the ocean, lower than 20 NTU. Which is not really a limitation as these thresholds indicate extremely clear water, not a meaningful data set for the purposes of floodwater fluvial sedimentation monitoring.

These small sensors were not designed for field deployment/immersion. They will rust and foul if immersed in water for a few days.

Before and after the flood: Guerrilla turbidity EIoT monitoring

Water monitoring systems will likely rest on a combination of methods (sampling stations, laboratory analysis, EIoT water sensors) for the foreseeable future. By the same token, EIoT adoption, when possible, brings staggering benefits and can yet be adopted in many more cases.

Even in edge use cases, such as stormwater TSS monitoring, ingenious home-made solutions can bring these benefits. The low-cost aspect of the system is vital, not anecdotical to such projects. Much cheaper system engineering = many more data sources = much deeper data sets.

As writes Ron Johnstone from SEMAT, who specialise in affordable aquatic monitoring on their website:

There are still vast amounts of critical water assets out there across the globe, entirely unmonitored. Environmental protection and environmental research will invariably benefit from the democratisation of EIoT based turbidity monitoring. The cunning handiwork of the civil engineers at UQ can be seen here in detail. Complete with walk-through instructions, on how to drill, solder and connect yourself into the DIY Valhala of low-cost EIoT turbidity monitoring.